What does “the home inspector represents the voice of the house” mean?

Typically, MN home inspectors are contracted to inspect the home for either a buyer or seller. This is usually recommended and arranged by their real estate agent. Often customers feel because they are paying for the inspector’s report that they can influence the content. Sadly, in a few cases, that is exactly what happens…but should it?

Accurate reporting on the condition of the house is both moral and vital!

Sellers need to know how the quality of the house, at time of sale, compares with other similar houses being sold in the same area so that they may set a realistic selling price. Buyers want to know exactly what is it that they are buying. All parties, being accurately informed, can accommodate cost and service issues within their buying/selling decision, providing they know fully what to expect.

Which inspector would you choose; the one who reports accurately and completely on the condition of the house or the one that tells a story that you would like to hear?

What is the difference between passive and active radon control? This question is often asked since the Minnesota Department of public health announced the new radon initiatives, effective January 1, 2014.

Passive radon control simply means that radon gas developing beneath the floor of the basement will be transferred to the outside of the house by a three or 4 inch diameter plastic tube, without the aid of a fan. ABS, which is black plastic tubing or PVC, which is a white plastic tube, may be used in the system, but; the two are not to be joined together. Their chemical joining systems are not compatible.

The passive system can only be used in areas of the home that are heated because the means of getting the radon from under the basement floor system and out of the house, through the roof, relies on the natural effect of heated air rising. Passive systems are usually found in new construction because the house designer can create a simple flow path within the building structure from below the basement floor to 12 inches above the roof and; a passive system is all that is required under the IRC code, adopted in Minnesota. 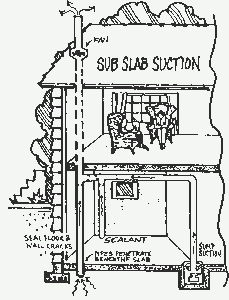 New home design in Minnesota, takes advantage of the code required drain tile system that surrounds the house. The drain tile usually drains into a floor sump where moisture gathers to be expelled to the outside via a sump pump. Most modern sumps have a sealable lid with provision to install the radon tube. The warmed air rising in the radon exhaust tube lowers the pressure in the entire drain tile system so directing all radon under the floor system to atmosphere without ever entering the home. The passive system, costing just a few hundred dollars, is a satisfactory system that cannot be said to be ideal in either new or existing construction.

The active system however, costing only a few hundred dollars extra, guarantees control of the gas flow from under the house footprint to atmosphere. The Minnesota Department of public health recommends the active system and calls it the gold standard. Active systems have a silent exhaust fan, that is usually installed either in the attic of the home or on the outside of the house where they can suck radon out without having to rely on the physics of heat rising or passing through the house structure. The precise amount of suction can be confirmed by a simple chemical filled plastic tube (costing about $12), called a manometer, that is installed on the radon tube, in a place where it can easily be observed. Discounted radon fans may be purchased at the Minnesota Department of public health to reduce the cost of the radon installation.

Why don’t some home inspectors go on the roof? There are no requirements in the standards of practice of the national associations for a home inspector to go up on to the roof. Those inspectors who do walk the roof do so to be competitive and to be able to get…up close and personal… to any issues affecting the roof. Getting onto the roof is a personal decision and it would be rare to see a home inspector who would walk roofs that are steeper than 6 in 12 slope.

Inspection from the ground using binoculars is very effective. The type and condition of the roof surface can largely be seen from the ground. A good pair of binoculars will help in getting a close look at details such as the flashing around chimneys and the use of chimney crickets. Inspecting the roof from a ladder will help greatly. 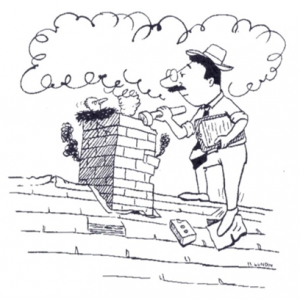 Gutters, the life expectancy of the roof, number of layers and condition and location of fasteners can all be seen from a ladder. Number of layers can also be assessed by examining the shingles on the rake edge.

Walking the roof can involve insurance and legal issues if the inspector has employees or permits the customer or realtor to climb onto the roof. OSHA rules clearly state that the home inspector is not to work at more than 6 feet off grade without proper harness installed by a trained technician. Insurance companies support the criteria of OSHA, the federal job safety agency. So, in the event of an accident to your customer or realtor; it would be very unlikely that an insurer would pay a claim.

So, don’t judge home inspectors by whether or not they walk the roof! Judge them by the accuracy and clarity of the report that they make about the roof.