There are just two basic reasons for decks failing. The first is overloading and the second is improper construction.

Overloading: deck failure usually happens unexpectedly. We have been using the deck for several years, even barbecuing for the family without a problem. But today we are having a graduation party. Fifty teenagers’ crowd the deck which has never carried more than seven people! The music starts, the teenagers jump up and down, and the deck tears off the rim joist with the deck collapsing towards the house. Unfortunately several people are hurt. 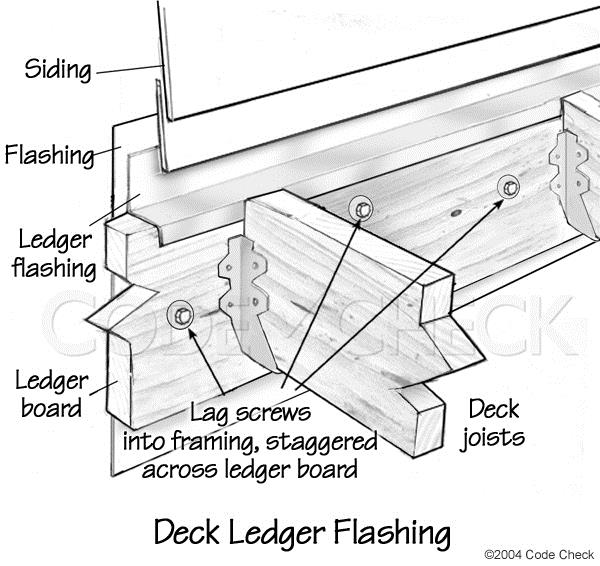 What happened? Floor loads in a house are limited to 40 pounds per square foot or a point load of 300 pounds. That limit is designed to carry some furniture and people walking or sitting in the room. Decks are usually designed to the same limit so our deck was grossly overloaded with a large number of people on it, and absolutely could not carry the extra shock load of the teenagers’ dancing . The reason the deck failed where it is connected to the house (or the rim joist) is that this is the point where the entire load is perpendicular to the direction of the fastener. It is like suddenly smacking the fastener with an ax.

Party on the deck, by all means, but have it checked for structural integrity to be sure that the extra load can be carried. Pay particular attention to the rim joist, which should be bolted in a manner that pulls the deck floor joist and the house floor joist together. Proper hardware and an installation guide are available from your local big-box store.

Improper construction: every existing deck should be inspected to see that it has been properly constructed. Unfortunately, many contractors and local building officials do not appreciate that proper deck construction is even more important than it is in a house. The deck at some point will carry greater loads than the house floor and is being continually attacked by the weather where it has to contend with sun, rain and snow loads.

Any home inspector can determine if your deck is capable of carrying the loads required. Most often a contractor will be able to reinforce the existing structure without the need of building a new deck.