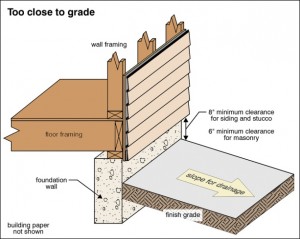 The neighbor’s basement is not a good idea. But there is a point to be made; that is once the movement of surface water is changed it may impact other homes and this could open a homeowner up to a lawsuit. So, before beginning to re-landscape you should always check with the city and the neighbors; thoroughly explaining the plan and seeking each of their approvals.

Moving some dirt around doesn’t sound like too big a deal…but are there any other concerns before starting this type of project?

There sure are and one of those would be making certain the earth isn’t placed too high on the foundation. If the earth is too close or contacting the wood framing, this would cause a different type of moisture intrusion. It would not disclose itself in the basement or crawl space, but it would rot out the structural wood framing. For that reason the building code requires a separation between the top of the foundation and the finished earth grade. Be sure and also look out for planter boxes that are too high up onto the wall, buried brick weep holes 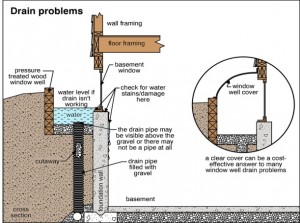 and stucco drip screeds. Each of these is very important, but they are a different type of moisture intrusion and will be explained in greater depth later.

But landscaping is not the only problem on the outside of the home…have you ever heard of hardscaping?  Check back soon for part 5 in our series on resolving moisture problems in the home. 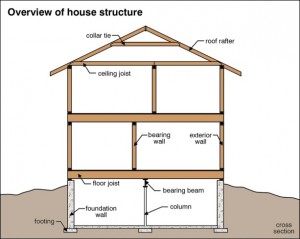 Approximately 90% of all structural building failures are caused by moisture. This problem is clearly the #1 enemy of any home. Regardless of age, style, or location; moisture is extremely damaging and all homeowners, home buyers, or real estate professionals need to be able to recognize it.

To begin understanding moisture, it’s important to understand what the structure of a house is. There are 4 parts to the buildings ‘super’ structure and they are the:
1. Foundation
2. Floors
3. Walls
4. Roof

Moisture can easily enter these spaces from either outside or inside of the building. Sometimes moisture is visible on the surface of building materials making it easy to recognize, but most of the time it is located in concealed spaces behind the finished building materials that are not visible to the untrained eye. The longer dampness remains unchecked the more damaging and expensive it becomes to remedy.

This begins our journey; together we will methodically go through the entire house searching out this most elusive nemesis. Some of the concerns will be simple and easily understood, while others may be a bit more complex. It is my hope, that in the end, you will better understand moisture and its negative impact on the home.