Too many homebuyers have hired MN home inspectors that found the sellers disclosure regarding basement moisture to be incorrect and sometimes blatantly false. Unfortunately, too often, unsuspecting real estate agents are pulled into this scheme. The biggest culprits of this ruse are sump pumps and drain tiles. You would be surprised how many innocent agents are told the basement of the house they listed is drain tiled…and never look to verify that it is true. This is way too risky and this home inspector intends for that never to happen to you. Honestly and understandably, many agents and homeowners have never been trained to be able to distinguish between the different types of water control systems.

Some systems work and many do not.

Recently, one of my home inspection students told a horror story in class about a lawsuit his daughter won against the real estate agents involved in her home purchase. The MLS listing stated that the house was drain tiled and the buyer’s agent when seeing the sump basket verbally confirmed that to be true. The daughter moved into the house and the basement flooded shortly thereafter. She was eventually awarded a $30,000 claim against both agents.

Drain tiled basements have a pipe that is continuous around the entire perimeter of the foundation. This 4” pipe has holes that will freely gather ground water before it gets onto the floor. These pipes extend and dump water into the basket which is then pumped outside. 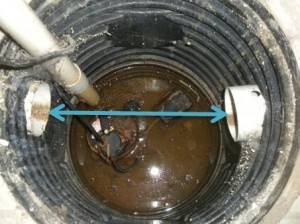 Very often what looks like a drain tiled basement turns out to be nothing but a pit in the floor. This would be a mega real estate agent or homebuyer nightmare.

Oh the sweet sound of the house speaking so softly.